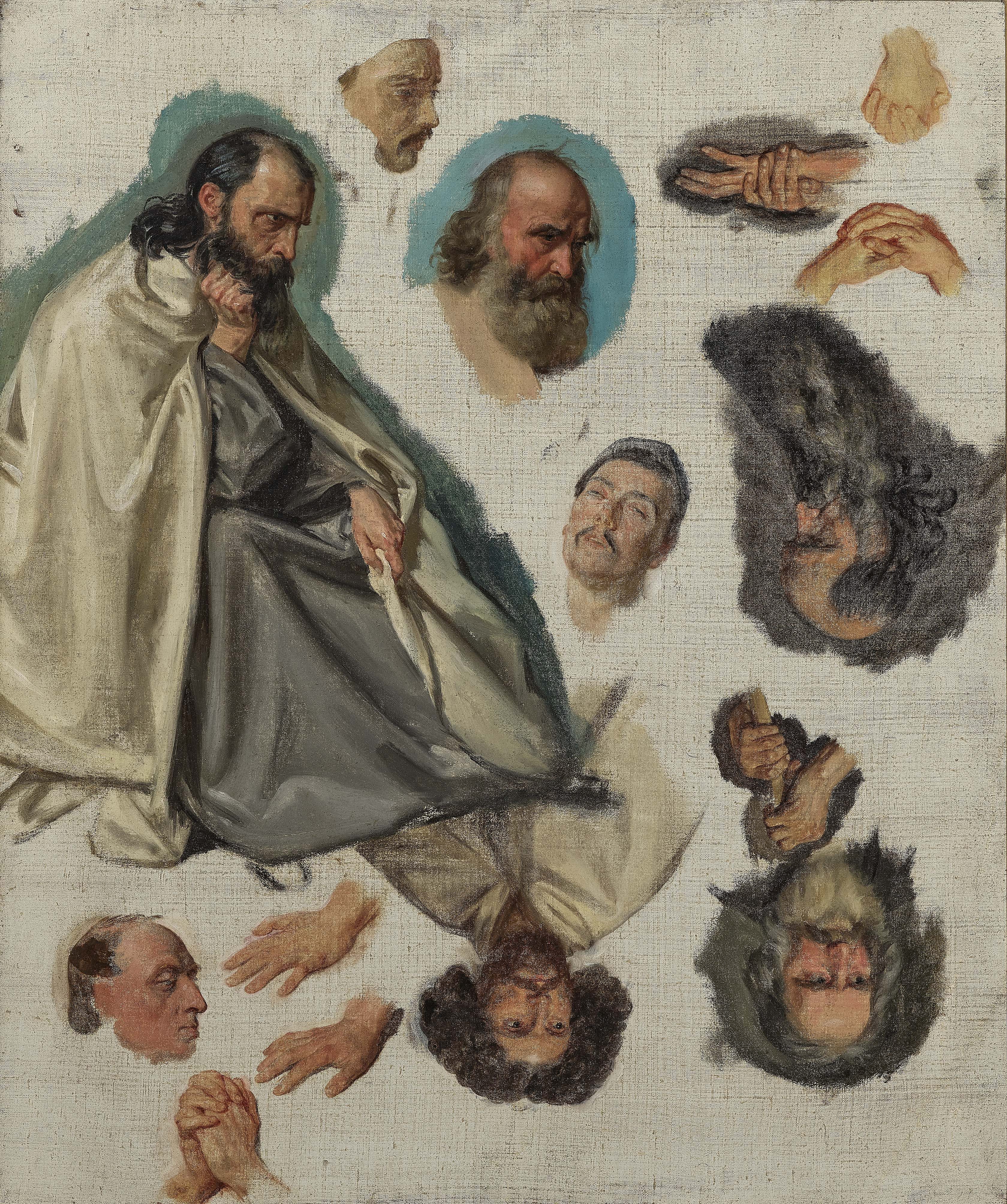 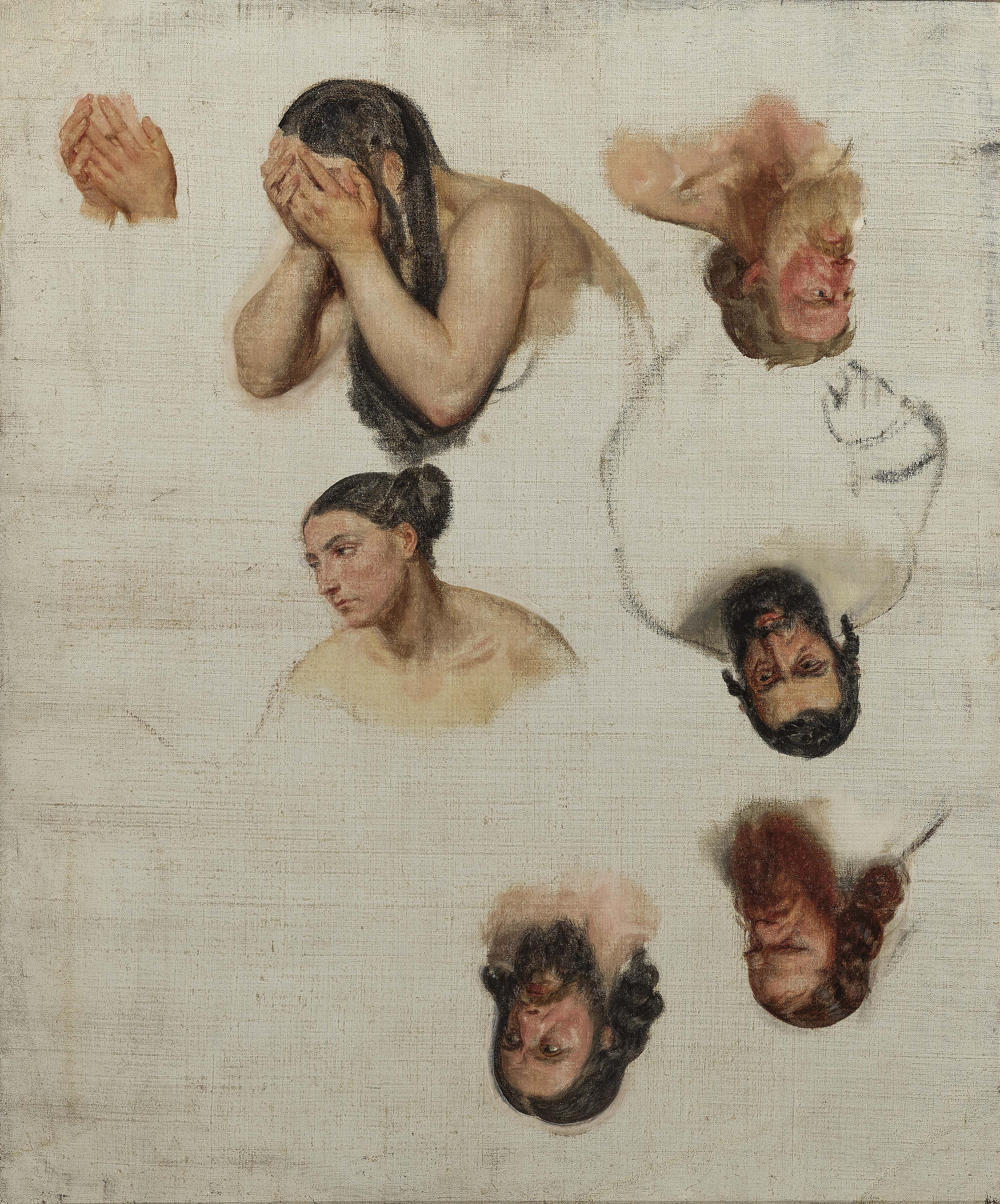 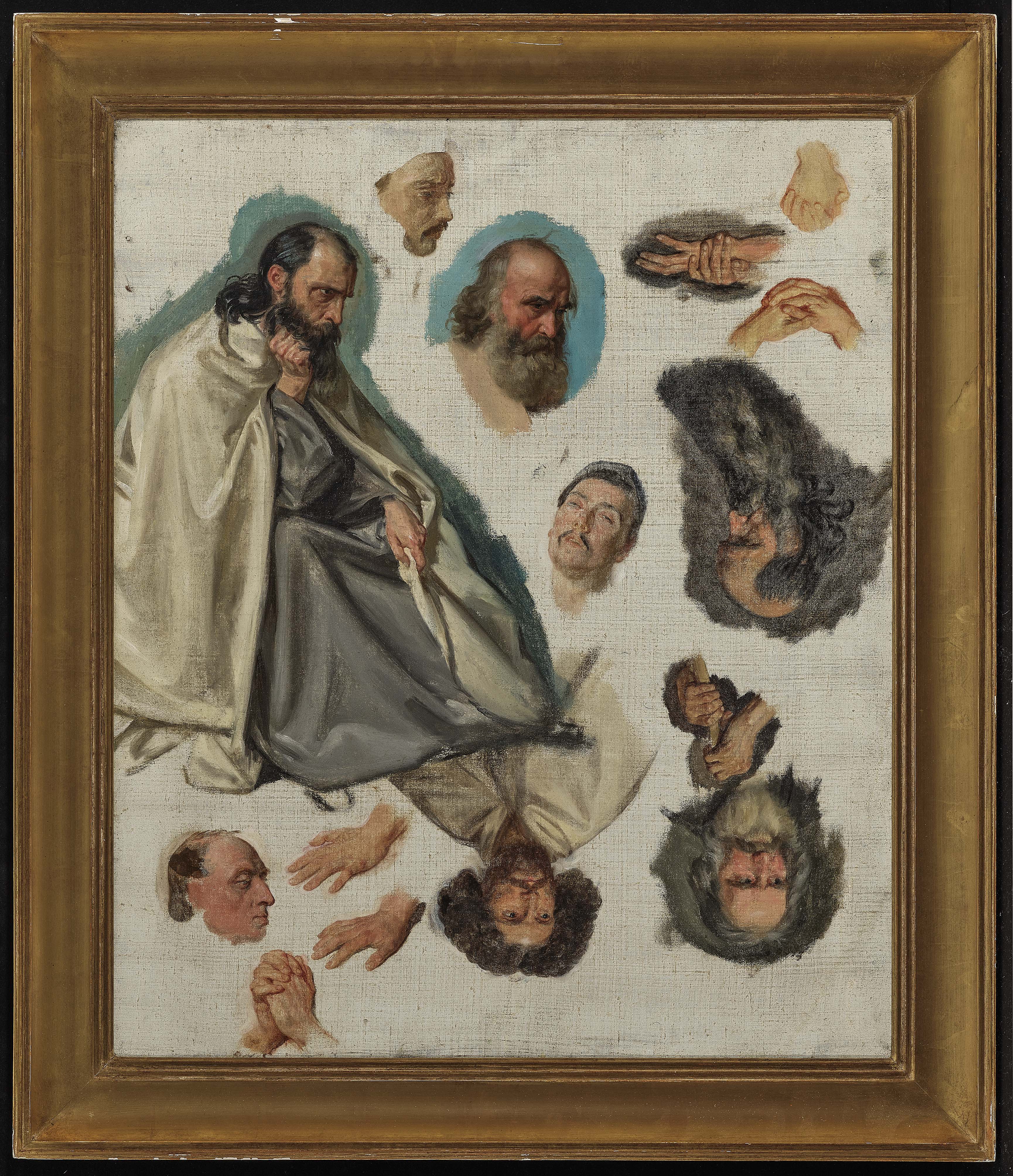 Studies for the Paintings in "La Madeleine", Paris

Paul Delaroche is regarded as the most important representative of history genre painting in France and he contributed considerably to establish it as a recognized species of painting. Paul Delaroche began early (from 1822) to exhibit his works in the Paris Salon. With mostly dramatic, emotionally charged biblical and historical subjects, he inspired his contemporaries; even established artists such as Théodore Géricault were full of praise. In the times of the revolution of 1830 Delaroche had good relations to the house of Orléans. With the following exhibitions in the Salon he was able to increase his fame and recognition. In 1832 he was admitted to the Académie des Beaux-Arts at an unusually young age. From 1833 he was head of one of the most popular studios of his time at the École des Beaux-Arts. One year later, in 1834, he received his hitherto most prominent commission: the creation of a fresco cycle for the newly built Église de la Madeleine. Shortly afterwards he went on a study trip to Italy with artist friends, 1835 he married Louise, the daughter of the famous artist Horace Vernet. While still in Rome, he was told that the central part of his commission for La Madeleine, the design of the apse, was awarded to Jules-Claude Ziegler. Paul Delaroche finally withdrew from this project. Delaroches most famous work, which is still preserved today, was created in 1837: He received the commission to paint the Hémicycle in the newly built Palais of the École des Beaux Arts, his most monumental work: At the site of the Écoles prize-giving ceremonies, he illustrated the most famous artists of all times, confidently following models such as Raphaels School of Athens and Ingres Apothéose dHomer. The two paintings in question, with studies for the six lunettes of La Madeleine, date back to a commission from 12 November 1833. After his return from Italy he continued to work on this commission for a short time. However, after failing to convince the responsible minister, Adolphe Thiers, to remove the commission for the design of the apse from Jules-Claude Ziegler, he withdrew completely from this project and also reimbursed the minister for the considerable advance of 20,000 francs. The Louvre in Paris houses a series of undated drawings and watercolours made by the artist as part of the original project. The two artworks in question appear to have been of fundamental importance to the project. The individual studies of bearded men are clearly related to the drawings of the Louvre. Cf. the project for the decoration of La Madeleine: Bann, Stephen, Paul Delaroche - History Painted. London 1997, p. 13, 174-78 - Brunel, Georges, Delaroche et le projet de la Madeleine in cat. Paul Delaroche - Un peintre dans lhistoire. Nantes, Musée des Beaux-Arts, 22 October 1999 - 17 January 2000 and others Paris 1999, pp. 87-103.

Provenance: acquired in 2015 from a French private owner. - Private collection.